Artifact has the potential to revolutionise the TCG industry Valveâ€™s long-awaited card game based on the DOTA universe is upon us. Artifact is finally stream-able to the masses. The triple lane system and â€œshopping phaseâ€ are set to breathe new life into the world of trading card games. But will this be enough to mask the elephant in the room? Thereâ€™s been repeated criticism on Valveâ€™s business model, ranging from the $19.99 price on launch to the $1 entry fee for drafts. Purchasing the game will grant you two starter decks, 10 card packs valued at $2 each, and five tickets, which is stuff most card game enthusiasts end up opening their wallets for when picking up another game like Hearthstone. And while drafting will always yield the possibility of earning your dollar back, some casual players may not feel comfortable surrendering their money to beta players with a six-monthÂ head start. Fortunately, Artifactâ€™s nuances are sure to keep players of all skill levels on their toes. 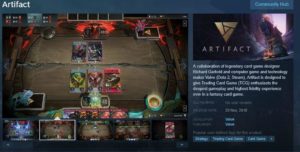 Despite having the ability to go â€œall inâ€ on one lane, this seems rarely advisable to distributing your resources over two lanes. Not only does an Ancient have 80 health, double that of a regular tower, but developing tunnel vision on one lane could see your opponent overwhelming you in another. Ideally, you want to take a few turns to consider your options and test the waters with cheaper spells like Hip Fire before committing. Once you can predict what your opponentâ€™s weakest lane will be, then itâ€™s time to drop something like Time of Triumph, an 8 Mana card that will buff all your heroes in one lane. Day one of the Artifact Preview event saw the casters discuss this practice and were all in agreement that games where two lanes are taken down over one easily exceeds 80%. The likes of Swim, Fwoshy and Hyped-AF were on casting duties for an official preview event this weekend. For many of us, this was our first opportunity to witness full games being played out. 128 card game veterans â€“ spanning across GWENT, Hearthstone and even Tyler â€œNinjaâ€ Blevins of Fortnite fame â€“ battled it out for a share of the $10,000 prize pool. The decision to make it a draft format was a bold one but also allowed viewers to see more whacky combos and outplay potential rather than typical â€œnet decksâ€. This was highlighted with Adrian â€œLifecoachâ€ Koy drafting what the casters described as a fairly janky deck on day one and, despite its inferiority, securing a 2-0 victory. That said, the preview event wasnâ€™t without its flaws. Instead of opening with an introduction video that explained the basic rules of the game, viewers were thrown straight into the deep end. Having CCG veterans like Sean â€œSwimâ€ Huguenard discussing the â€œnext levelâ€ plays should serve as decoration and not form the foundations of the stream. The chat was constantly asking things like â€œWhat is this?â€ and â€œHow do you even play?â€ until the end of day one saw a relevant question achieve meme status. This should have been Valveâ€™s opportunity to showcase their game to its target audience. Instead, they left viewers more alienated than ever. If Valve hope to conquer the world with Artifact, then this needs to be a priority for future events. This was, however, rectified at the start of day two with a detailed video explaining the game, but the damage had already been done. 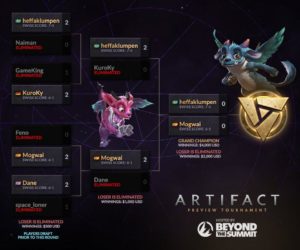 If anything is taken away from this event, itâ€™s that Artifact has enough RNG to make Hearthstone blush. However, itâ€™s not as impactful as some of its counterparts. Prior to its recent â€œHomecomingâ€ rebrand, a game of GWENT: The Witcher Card Game could too often be decided on who won the coin-flip alone. This is not to deny that turn one RNG such as which lane your heroes are deployed in isnâ€™t impactful to the rest of an Artifact game, but itâ€™s spontaneity like this that encourages players to develop adaptable strategies rather than building decks around one particular win condition. Needless to say, Valve is no stranger to quality. A past life saw us bowing down to their ground-breaking first-person-shooter Half-Life 2 and itâ€™s clear that, with Artifact, they intend to go the same way. Collaborating with experts like Richard Garfield will ensure the game gets not only the right exposure but the right expertise, too. And thatâ€™s not touching the community market. Being able to trade cards with friends and fellow enthusiasts across the world will expose a whole new generation to a practice many of us as kids took for granted. Will Artifact cards become the next bitcoin? Letâ€™s just say, weirder things have happened! Artifact launches on Steam November 28 with a mobile version scheduled for 2019.