It was going to be the â€œHearthstone Killerâ€, or so many fans claimed. There would be multiple lanes, dozens of game-deciding micro-decisions and, most importantly of all, a million dollar tournament. Despite an announcement so rocky that describing it as â€œmixed reviewsâ€ would be generous â€“ think of another â€œdo you guys not have phonesâ€ moment â€“ Valve spent almost eighteen months keeping us in suspense about its upcoming project, Artifact: the DOTA Card Game. However, what seemed like a chilly reception served as an omen for things to come. In November 2018 â€“ following a preview tournament heavily slated for being too complex for casual viewers â€“ Artifact launched with a player base peaking at 60,740. Its opening Twitch numbers were also impressive and briefly exerted dominance over those of GWENT, a CCG fresh off its â€œHomecomingâ€ revamp. CD Projekt Redâ€™s acclaimed card game was also nursing its own casualties, with big names like Sean â€œSwimâ€ Huguenard jumping ship to join the Artifact esports team. That said, Valveâ€™s launch wasnâ€™t without its issues. Many considered their decision to lock the game behind a launch price as evidence of Valveâ€™s blatant arrogance. After all, they were the creators of Steam, an online store that millions of PC gamers depend on. Could they afford to take risks like this? Well, Valve have always had a unique approach to their games so itâ€™s no mystery that theyâ€™d want to add their own touch to the CCG/TCG genre. But charging $19.99 left a sour taste in the mouth of thousands of potential customers. The key to a good card game is downloading the free-to-play client to try out a few games and then, on realising youâ€™re enjoying yourself, perhaps investing around $20 on card packs to build a semi-viable deck. With Artifact, potential customers were forced to already make a financial commitment before the game had finished downloading. To be fair, there was a money-back guarantee in place, providing you didnâ€™t open your starter packs â€“ but paying up front was still required. Fast forward almost six months, Artifact has lost 99.5% of its player base, barely surpasses 50 average Twitch viewers, and has seen the back of 13 team members, Richard Garfield included. The light has fallen on a project that once had the world at its feet. Artifact: Homecoming? 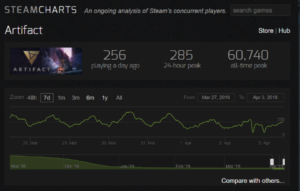 Going back to the drawing board is all the rage these days. Everybody thought CDPRâ€™s decision to starve GWENT: The Witcher Card Game of new content for six months while they devoted their full capacity to revamping it would result in their entire player base abandoning them for upcoming titles like Artifact â€“ no irony desired. Despite a shaky launch, GWENT: Homecoming has returned to the top of the food chain and has just released its first expansion, Crimson Curse, to vast acclaim. And as recently as last week. Valve finally found where they left the password for the @PlayArtifact Twitter account to release a statement on the state of the game. They said, â€œArtifact represents the largest discrepancy between our expectations for how one of our games would be received and the actual outcome.â€ This statement alone speaks volumes on their initial expectations for the game. Itâ€™s been no secret that Valve have wanted to create a competent rival for Blizzardâ€™s Hearthstone and Iâ€™m not ashamed to admit that I thought this would be it. Many lovers of CCGs were growing tired of their ability to outplay opponents being kicked to the curb by game-deciding RNG. Unfortunately, criticisms towards Artifactâ€™s complexity and own RNG from cards like Cheating Death proved impossible to ignore. A companyâ€™s Half Life 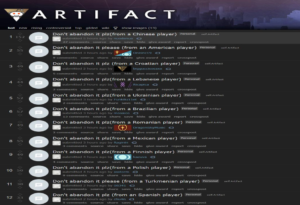 We can exchange memes on the failure of Artifact all we like, but itâ€™s important to remember that the game still has a loyal, if small, community. This week, I spent some time on its official Reddit page to understand the thoughts of the hardcore fans. Are they waiting around for the alleged â€œmillion dollar tournamentâ€ that has assumedly been placed on the back burner? Maybe some are, though most seem emotionally and financially invested in a game that they believe still has potential. To them I say, I feel your pain. While I havenâ€™t played since January, my playtime exceeds 150 hours and my account has next to a full collection of the Call to Arms set. Michael â€œNoControlâ€ Toryk, member of TeamRankster and founder of the Wild Hunt North America tournament series, had this to say: â€œFrom an extremely experienced card player perspective, Artifact is a wonderful game. Where they failed (and what every card game needs) is to capture the casual audience. The game was simply too hard for people who werenâ€™t grinding it every day.â€ I also asked him whether he felt the RNG of Creep deployment and combat arrows were bad for the game. He added: â€œI look at it similar to getting mana screwed in Magic or losing a hand you were heavily favoured in Poker. Sometimes, you are on the low end of the bell curve for variance.â€ What happens now? For a start, making the game free to play already puts the ball in the court of casual players. They can try it with no strings attached. Valve will still have plenty of ways to make money off the game through the trading market and microtransactions. Is it time they swallowed their pride and faced facts? Once upon a time, they ruled PC gaming with an iron fist. Now, not so much. A rival of Epic proportions approaches. If Artifactâ€™s â€œdeep rooted issuesâ€ arenâ€™t enough, the success of Epic Games online store should serve as the wake-up call that Valve needs to get their act together. They have a backlog of beloved games crying out for sequels and fresh updates, not to mention a community mod for DOTA 2 thatâ€™s taking over the world. Valve are no strangers to building on the creativity of their fans. Itâ€™s time they got to work.