by Wessel Minnie
Adin Ross, who has one of the most subscribed Twitch channels, has been banned from the streaming platform for showing a GTA RP sex scene with an NPC. Published on May 29th, 2021
At this point, the Twitch bans are getting more silly by the moment. From MrChanChan getting banned for smashing a fish he caught, to EagleAye getting banned for in-game nudity on the GTA RP NoPixel server. Now, one of the platform's biggest stars, Adin Ross, who has one of the most-subscribed channels (over 62,000 subs) has been banned. Adin Ross' ban, if you can believe it, is for showing an in-game sex scene with an NPC in a GTA RP server...all while the hot tub meta rages on.

In-game nudity is a thing in GTA, and the player can interact with characters to start off a sex scene. These scenes aren't of real people and let's face it, they aren't very realistic either. However, Twitch has still decided to ban Adin Ross. 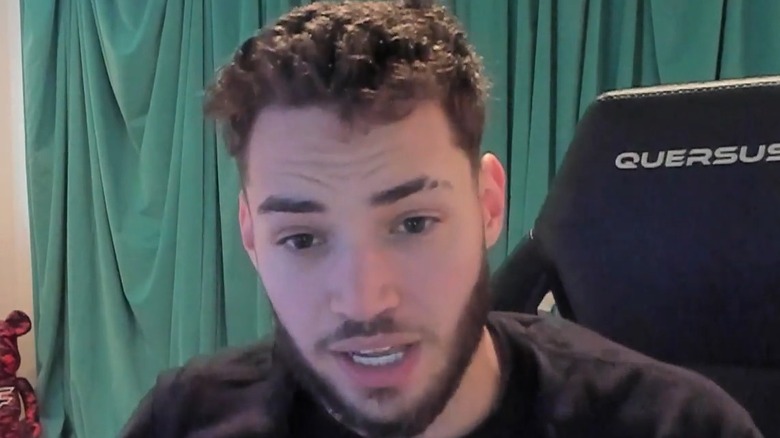 His ban came into effect on 29th May 2021, and Adin Ross revealed that, at the very least, the ban isn't permanent.

Adin Ross went on to explain why he received a Twitch ban to his fans on Instagram, which you can check below.

Adin Ross explains: I got banned because of the GTA, the sex scene. Just go to Twitter and tweet out #FreeAdin. F#$king Twitch, guess what, you can be in a hot tub, 75% naked, with t#$%ies and #$s out, but you can't f$#king...I guess this is so stupid."

He is, of course, talking about the hot tub meta, which continues to splash on, with real people in very little clothing raking in those subs.

It is important to note that while in-game nudity is not forbidden by Twitch, that's only for unmodified versions of the game. In the case of GTA RP, is considered to be modified as it uses FiveM as a base.

At the time of writing, it is unclear when Adin Ross will return to streaming. The content creator did not reveal when his ban will be lifted, only noting that it is not a permanent one.

Check out our dedicated section for more Twitch news, from the antics streamers get up to, to the hot tub meta and more.