Nikola Savic
Published: May 30th, 2021, 12:35
The first two Legendary cards from The Wailing Caverns mini-set have been revealed. Let's check out what they do. The Wailing Caverns Hearthstone mini-set is just around the corner and with just a few days left before the release, Blizzard is rapidly revealing new cards.

On Friday we saw the first three cards from the set, the Dungeoneer trio, and now we have a chance to take a look at two out of four legendaries slated to be released with the new mini-set. Mutanus the Devourer is a 7 mana 4/4 minion with a unique effect. Mutanus will "eat" a minion from the opponent's hand and gain its stats.

It is a very powerful disrupt mechanic that can cripple some combo decks or any other deck that relies on a specific minion. It is clearly a great counter for Tickatus (provided you get a lucky hit).

All in all, it looks like a great card and a very useful tool in most of the control decks, not just for disrupt effects, but also just for pure value and maybe even solid tempo, depending on what has Mutanus eaten. 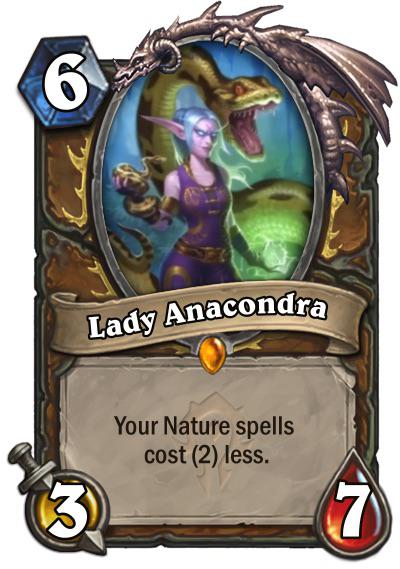 This is a very difficult card to evaluate properly. Historically, the cost-reduction effect has been always strong in Druid, particularly for many Combo Druid archetypes.

Stats are definitely bad and its price is a bit steep, but you should never write off Druid's combo potential, and this card could definitely enable a lot of it.

One thing we are a bit disappointed about is just how boring the effect of this card is. This is one of only four Legendary cards of the set, and we would like to see some more unique and never-before-seen effects, not jet another cost-reduction effect for Druids. Where is your creativity Blizzard?

In order to evaluate this card properly, it will need to be tested with all currently available Nature spell for Druid, and this is one of those cards that will definitely become stronger as more cards are being added to the game. 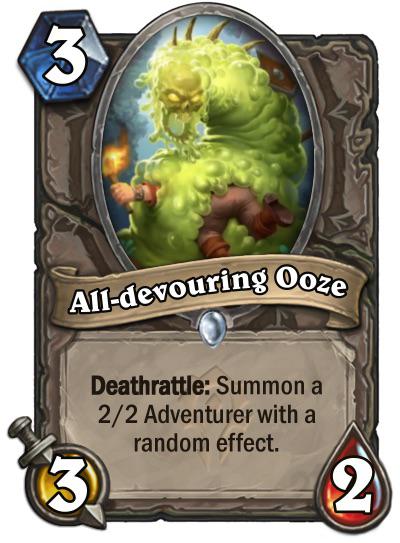 As a bonus for today, we will take a look at All-devouring Ooze, another new card revealed this weekend.

And while most Oozes in Hearthstone are associated with weapon destruction effects, others are themed around splitting/spitting.

Echoing Ooze summons an exact copy of its self, while Carnivorous Cube "spits out" its victim once it dies.

All-devouring Ooze is a Deathrattle minion which will also spit out his victim (Adventurer) once it dies.

It is an extremely strong arena card, but we are not exactly sure if this minion will find its place in a constructed meta. It will definitely be a nice addition to Deathrattle Demon Hunter, and that's the place where we will see this card being tested the most.

If this was Hearthstone from the 2015-2017 era, this card would be borderline broken, but nowadays it's just a solid card, and they usually don't make the cut.

What are your thoughts on these new cards? Are you planning on buying the mini-set? Let us know!