With Coronavirus still causing chaos to tournament organisers across the world, It's fantastic to see one of the most foundational esports still endures. StarCraft 2 is set to hold the finals of 2020 Global StarCraft II League Season 1 on Saturday, June 6th.

Both competitors had a tough path to the finals, with Cure securing his spot in the finals on May 30th after defeating rival Terran Lee "INnoVation" Shin Hyung in the round of four.

Although many predicted INnoVation would take the win here, Cure out-performed the three-time GSL-winning opponent in a tight 4-3 victory. On the final map, Zen, Cure was able to push in on two bases, while his opponent had just started building his third. This strategy caught INnoVation unprepared, allowing Cure to cause dramatic damage to his opponent before securing the win.

SO proud of Cure!! What a clencher of a Semi that was I can't wait to watch him vs TY in the final :D #GSL pic.twitter.com/x3afMAJLzH

TY's bracket was equally arduous, clashing with Protoss player Won "PartinG" Lee Sak. In their semi-final clash, TY dominated the PartinG in four out of six of the maps played, showcasing his mastery of the Bio rush.

TY's simple combination of Marine/Medivac pushed through PartinG's early game Protoss in minutes, taking him quickly to a three-game advantage. PartinG was able to stabilise for the next two games, using initial harassment to hinder TY's push. On the final map, things went into a bizarre late-game, with TY laying siege to his opponent with nukes, while PartinG desperately tried to counter with a mix of units, but to no avail. 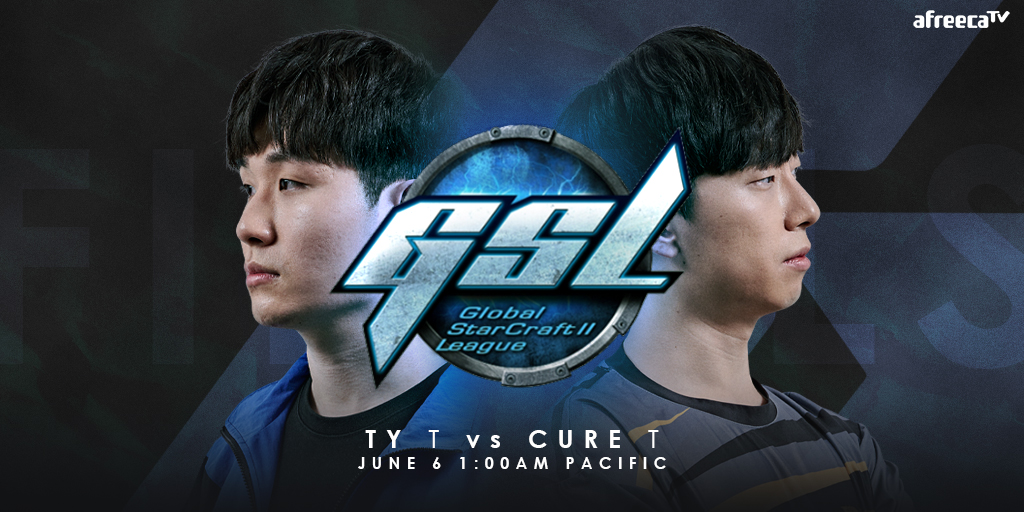 After these thrilling semi-finals, the two Terran players are set on a collision course in a matchup billed as "Last Terran Standing." On Saturday, June 6th the two finalists will take their place at the GSL's own Hot6 Afreeca Colosseum, the action kicks off from 5 pm KST, or 9 am BST.

The matchup will pit the two top SC2 players in the world against each other in a titanic best-of-seven clash.

The two Terran players are set on a collision course in a matchup billed as the "Last Terran Standing". Hosted in the GSL's own Hot6 Afreeca Colosseum, the action kicks off from 5 pm KST, which is 9 am BST.

You can catch all the action live on Afreeca TV's YouTube channel. And in case you forget, YouTube's helpful reminder system can set an alert for you!