by Payton Nash
Valorant’s complex ranked ladder can be difficult to understand, so this should serve as a guide to give you a fundamental grasp of the system. Published on April 5th, 2021
Firstly, an understanding of Rank Rating (RR) and Match Making Rating (MMR) is necessary. RR is the number you will see below your rank. While MMR is a hidden value that is supposed to reflect your performance level, as determined by Riot when you are first given a rank. Subsequently, that hidden value will change based on how well you perform in your games, and whether you won or lost. 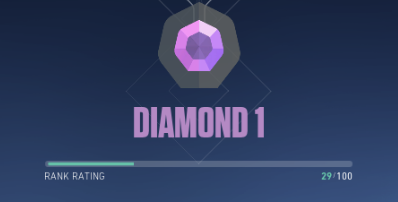 The majority of RR comes from the outcome of a match. On a win, you will gain anywhere from 10 to 50 RR. From a loss, you will lose between 0 and 30 RR. If you reach Diamond rank or higher, RR changes slightly. On wins, the minimum RR gain becomes 5, while the maximum RR loss becomes 50.

In order to demote, you must lose a game while at 0 RR in your current rank, this is called demotion protection. Once you rank up, you will start at a minimum of 10 RR in your new rank. The only exception to this is the Radiant rank. Radiant has a maximum of 500 players per region. To reach this rank you must acquire more RR than the 500th player in Radiant. Also, there is no demotion protection in this rank. 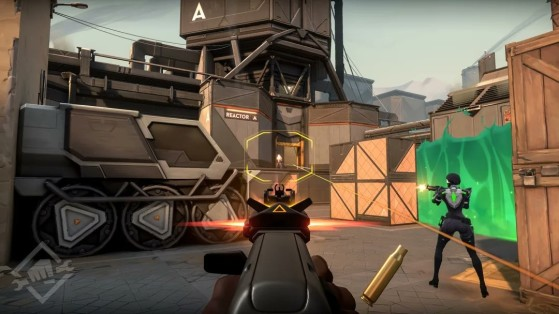 MMR is a fluid system; it changes after every game you play. And, MMR is separate from RR; meaning you could be Diamond 3, but have the MMR of a Diamond 1 player. The inverse is also possible, where you have a higher MMR than your rank.

Essentially, what the game tries to do is get your visible rank as close to your MMR as possible. Causing you to lose more rating for a loss than you gain per win, or win more rating for wins than you lose for losses.

The former can be quite a frustrating experience, and it has caused many players to wonder why their MMR became separated from their rank in the first place. The main culprit is a winning streak. If you have a 50% win rate, and you go on a winning streak, your rank will become inflated.

How to climb in Valorant

In Valorant’s current ranked system, consistently winning games against evenly matched players is key. In order to climb the ranked ladder and have your MMR follow, you must win regularly over a long period of time. Rather than win every game over a couple of days.

When starting out, you will be placed on the lower end of where Riot Games, the developers of Valorant, believe your actual rank is. If you converge your visible rank and MMR, you would begin to see roughly even rating changes for wins and losses. Allowing you to climb the ranked ladder with a win rate of 50% or higher.

Below is an example provided by Riot Games, the developers of Valorant, of how a players RR gains and losses can change throughout the course of an act, and MMR’s role in those changes. 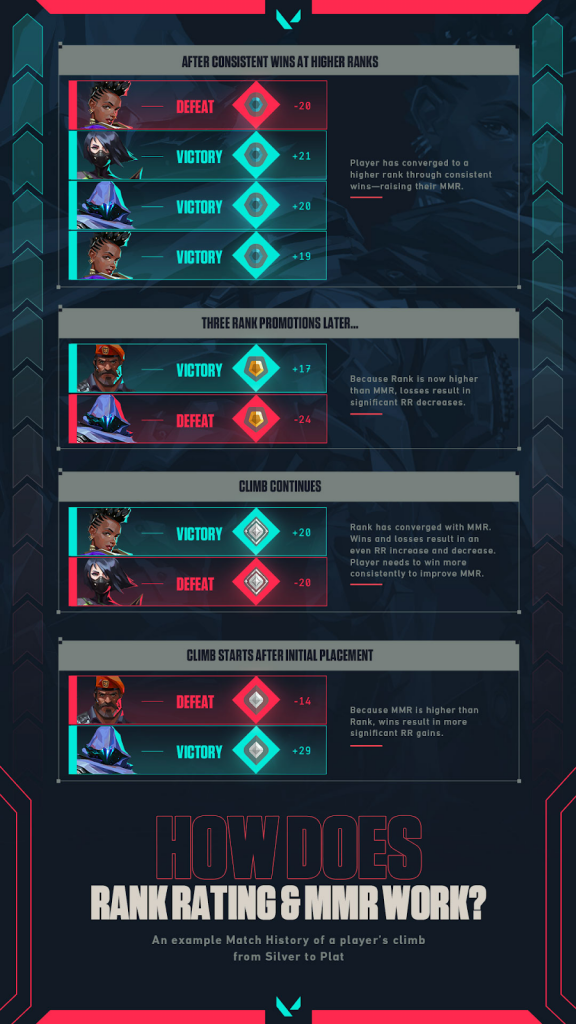 Hopefully, this explanation helped to give you a better understanding of Valorant’s ranked system. If you’re unsure about which agents to play in ranked, check out our agent tier list. Good luck in your games!